In preparation for analysis, dry and finely ground carbonate mineral samples and standards are weighed into clean Exetainers®, which are sealed with rubber septa. For the analysis, the Exetainers are loaded onto the gas bench at 72°C and all subsequent operations are carried out using the PAL A200S autosampler. Air inside the Exetainer is replaced by ultrapure helium via the autosampler, then the sample is acidified with 100% phosphoric acid. After an hour, the CO2 produced by the reaction is sampled and sent to the mass spectrometer in helium, via a water trap and GC column in the gas bench. Analysis is in continuous flow mode, with CO2 gas of a known isotopic composition used as the reference gas. Fractionation is calculated by multiple analyses of internal standards that have been calibrated against international standards NBS 18 and 19.

Carbonate samples should be submitted preferably as powders in a small glass vial (plastic causes static problems). If powdering is not possible, send small chips. Approximately 200 micrograms of sample is analyzed for pure carbonates; the weight increases for samples with a low percentage of carbonate content. The submitted samples should be accompanied by a list that includes the percentage of carbonate in the rock, and the (approximate) proportions of carbonate minerals in the case of a mixture (calcite, dolomite, magnesite, hydromagnesite, siderite, ankerite, etc.).

Please ship the samples to Janet Gabites, and email your sample list to jgabites@eoas.ubc.ca.

DIC is analyzed on the gas bench by adding 600 microlitres of the sample water to a clean Exetainer® that is sealed with a rubber septum. The Exetainer is flushed with helium to replace air in the headspace and to sparge CO2 dissolved in the water. Phosphoric acid is added, the sample shaken, and then left to equilibrate for one hour. The CO2 produced is introduced into the mass spectrometer in continuous flow mode.

A wide range of non-traditional stable isotope systems are currently analyzed at PCIGR. For these elements, the natural mass dependent isotopic fractionation is measured; accurately and precisely correcting for the instrumental mass fractionation without eradicating this natural signature is therefore crucial. Data are also sensitive to both spectral and non-spectral matrix effects (Barling et al., 2006); thus, every effort is made to remove all matrix. Every element system has its own issues in this regard.

Analytical protocols at PCIGR have been established for Li, Fe, Cu, Zn, Mo and Cd. Where the element of interest is the focus of graduate research, the student, under supervision, is responsible for establishing the protocol for the element. The first step is to establish conditions for precise and accurate measurement of a single standard (i.e., measurement of δ = 0). To do this, several factors are investigated. These include, but are not limited to: length of analysis, need for on-peak-zeros, automatrix effects, optimal analyte element/external normalizing element ratio. After this, a secondary standard is introduced to determine that accurate and precise, non-zero δ values can be measured. Finally, samples are measured. At this point, unsuspected matrix effects may be detected due to either a specific element causing a spectral interference or a high level of matrix-causing non-spectral matrix effects. If such matrix effects are detected, then sample purification protocols are fine-tuned to eliminate either specific elements and/or specific types of matrix, e.g., geological versus biological matrices (Barling et al., 2006, Shiel et al., 2009).

After PCIGR students have experienced a range of analytical issues and the rigour needed to establish measurement protocols for analysis of non-traditional stable isotope systems, students become fully capable of applying what they have learned to the isotopic analysis of any other element of interest on the Nu Plasma or on any MC-ICP-MS.

Lithium has only two naturally occurring isotopes, and has no similar mass element that could be used to monitor instrumental mass fractionation externally. Therefore, instrumental mass fractionation for Li can only be compensated for by assuming a stable drift in instrument behaviour. As a result, samples are measured by a simple sample-standard bracketing of measured ratios. The existence of only two isotopes means that Li is vulnerable to unidentified spectral and non-spectral matrix effects since these cannot be identified in the data. However, the low mass of Li means that few elemental and isobaric interferences are present, although 14N2+, 12C2+ can occur (Tomascak, 2004). Non-spectral matrix effects are mitigated by thorough calibration of the Li separation chemistry.

At PCIGR, we have adopted the approach of Jeffcoate et al. (2004). Using this method, we are currently able to measure δ7Li/6Li in samples to within ± 1‰ (2SD). 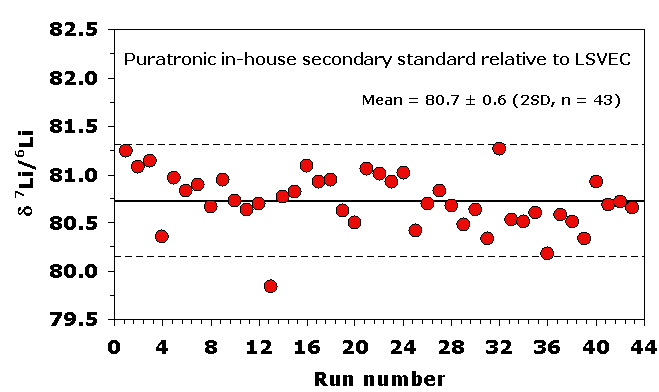 Li isotope systematics are currently being applied to pegmatite geochemistry (Barnes et al., 2008a, 2008b). 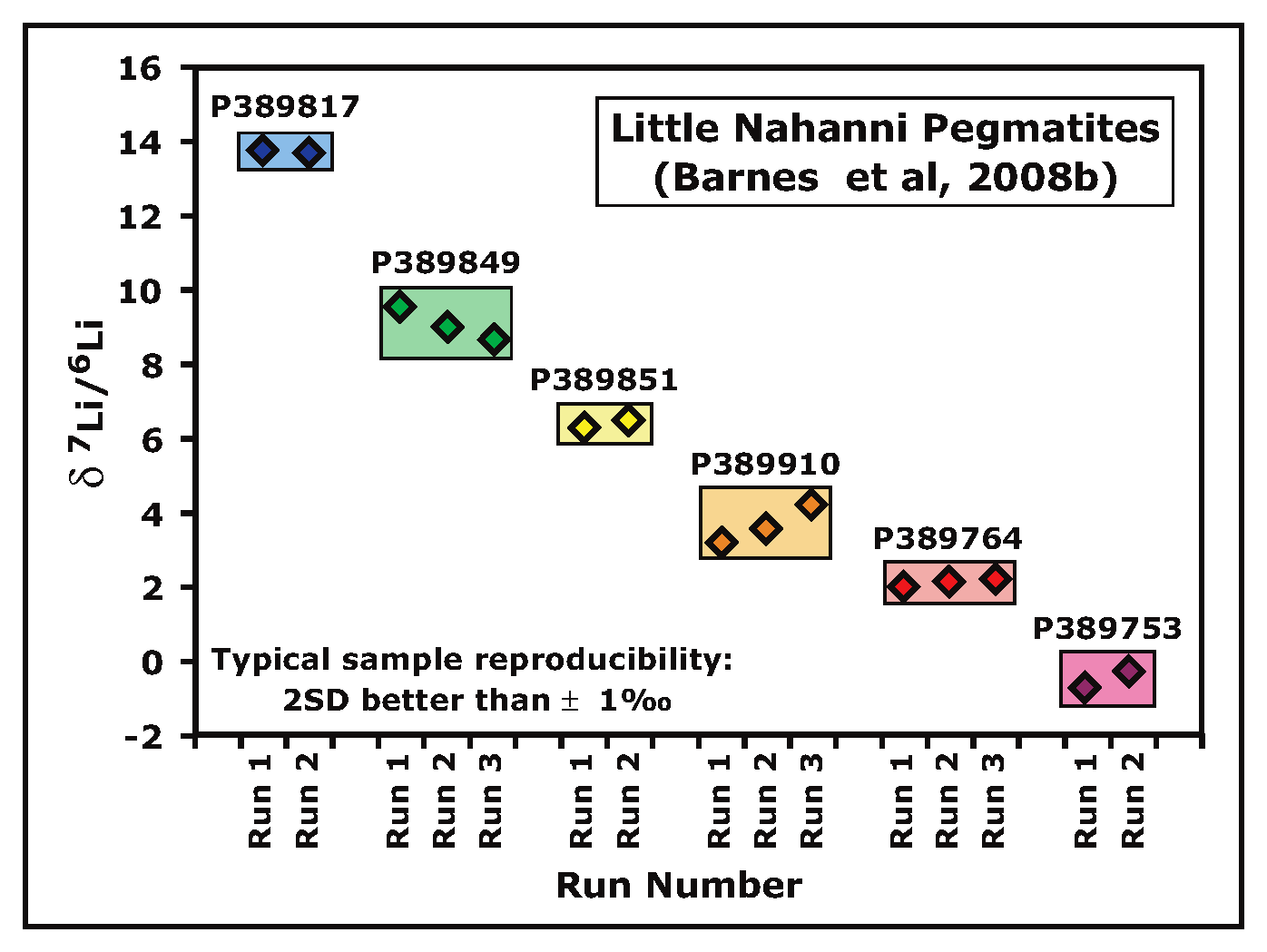 In contrast to Li, Mo and Cd have multiple isotopes; we therefore have a choice of possible elements to use to normalize the data externally for instrumental mass fractionation. For these elements, data quality can be assured by agreement of results from different data reduction methods (e.g., simple sample-standard bracketing of measured ratios, sample-standard bracketing of externally normalized data, and graphical data reduction), and by internal consistency of the δ/amu of multiple isotope ratios for individual runs. One has therefore several means of identifying spectral and non-spectral matrix effects for these elements.

For Mo and Zn, all the necessary isotopes can be measured in a single static cycle, with typical 2SD errors on δ/amu that are better than ± 0.05‰. In contrast, a dynamic approach that uses two cycles is required to measure Cd isotopes. This is due to the range of masses measured, from 107Ag (external normalization element) to 118Sn (isobaric interference). The dynamic approach can introduce additional uncertainty to the measurements due to the inherent instability of the plasma source. Even so, typical 2SD errors on δ/amu for two-cycle dynamic measurements is better than ± 0.1‰.

Cd, Zn and Pb isotope systematics are currently being applied to the sourcing of metals in bivalves (Shiel et al., 2008).

Fe isotopes present their own special set of difficulties as a result of major polyatomic interferences inherent to the ICP source: ArN+ (mass 54), ArO+ (mass 56), and ArOH+ (mass 57). Several approaches can be used to minimize the significance of these interferences; however, they generally rely on increasing the Fe signal relative to the interferences and thus require µg-size Fe samples. In order to measure smaller (<300 ng) Fe samples at PCIGR, we have been investigating various means of reducing argide production and transmission without sacrificing instrument sensitivity for Fe (Aimoz et al., 2008). 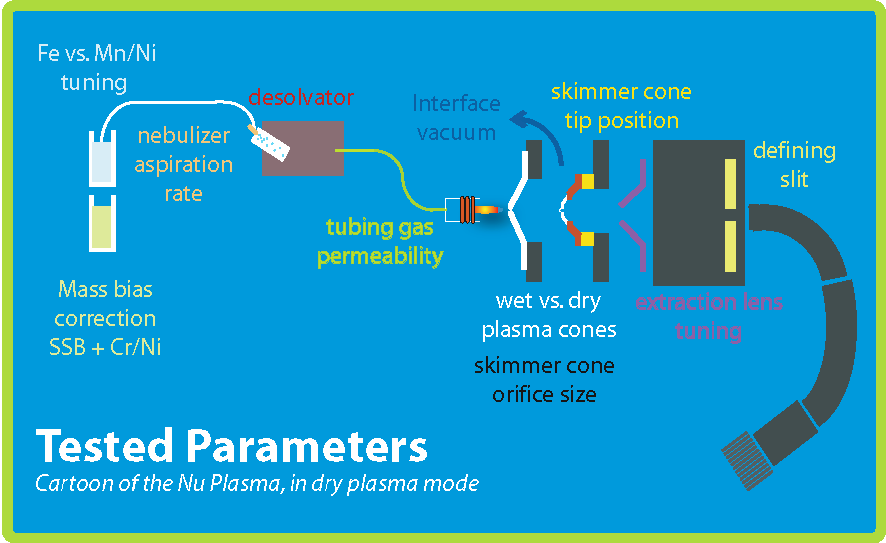 For Nd isotope ratio measurements, masses 150, 148, 146, 145, 144, 143, 142 are measured together with monitoring of Sm at mass 147 and Ce at mass 140, which allows interference corrections to be applied to masses 150, 148, 144 and 142. Nd isotope measurements are normalized internally for instrumental mass fractionation to a 146Nd/144Nd ratio of 0.7219 using an exponential correction. Interferences on Nd are calculated using natural abundances for the interfering element and adjusting them for instrumental mass fractionation, as monitored by the normalizing ratio used to correct the Nd.
[Annual values and reproducibility for the JNDI Nd standards]

Nd isotopes can also be measured by TIMS at PCIGR; however, MC-ICP-MS is usually preferred because of its faster output (~13 min/sample instead of ~1 hour) for similar precision.

The configuration used to measure Hf isotopes enables simultaneous collection of Hf (masses 180, 179, 178, 177, 176 and 174) together with monitoring of Lu at mass 175 and Yb at mass 172, which allows interference corrections to be applied to masses 174 and 176. Hf isotope measurements are normalized internally to a 179Hf/177Hf ratio of 0.7325 using an exponential correction.
[Annual values and reproducibility for the JMC Hf standard]

For Pb isotopic analyses, the instrument is configured for simultaneous collection of Pb (masses 208, 207, 206 and 204) together with Tl (masses 205 and 203), which is used to monitor and correct for instrumental mass discrimination, and Hg potential interference (mass 202), which is used to correct mass 204 for the presence of 204Hg. Mercury levels are always below 0.7 mV and more typically are less than 0.2 mV for mass 202, corresponding to a correction of less than 0.18 (0.05) mV on the mass 204 peak. To improve the reproducibility of the analytical conditions for the Pb isotopic analyses, and thus the precision, all sample solutions are analyzed with the same Pb/Tl ratios as the NIST SRM 981 standard, which requires determination of the exact Pb content after column separation.
[Annual values and reproducibility for the NIST SRM 981 standard]

A particular concern at PCIGR is that our MC-ICP-MS Pb isotope data must achieve the best levels of precision and accuracy required for investigating isotope systematics in mantle geochemistry (e.g., Weis et al., 2011). We therefore continue to investigate the roles of residual matrix, leaching and sample purification on the ultimate precision and accuracy of MC-ICP-MS Pb data (Barling & Weis, 2008, 2012; Hanano et al., 2009; Nobre Silva et al., 2009).

For Sr isotopic analyses, both TIMS instruments are configured for simultaneous collection of Sr (masses 84, 86, 87, 88) and Rb at mass 85, which allows for interference corrections to be applied to 87Sr for the potential presence of 87Rb. Each analysis takes approximately 1 hour. Sr isotope measurements are normalized internally to an 86Sr/88Sr ratio of 0.1194 using an exponential correction. For sample runs, data are normalized to the average value of the standard SRM NBS 987 (typically 3–4 standards are analyzed for every 17–18 samples).