Although a volcanic eruption in downtown 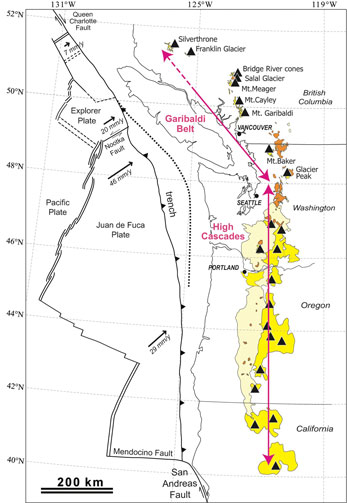 Vancouver might sound like something out of a movie, the Vancouver area has been volcanically active for more than a hundred million years. Magmatic rocks have been unearthed at downtown construction sites and are also visible in cliffs flanking Stanley Park and at Jericho Beach.

There are also numerous currently active volcanoes in British Columbia. For example, Mount Meager (located ~150 km north of Vancouver) was the site of the most recent major eruption, which took place at ~350 years BC. This explosive eruption deposited ash across British Columbia and Alberta. Among the devastating consequences was the damming of the Lillooet River by lava, which eventually led to a catastrophic outburst flood when the blockage failed.

The reason for magmatism at Mt. Meager, and at its neighbouring active volcanoes that include Mt. Garibaldi and Mt. Cayley, remains enigmatic and is one of the questions being addressed in a geochemical study at the PCIGR.

Mt. Meager is part of the Garibaldi Volcanic Belt, the northernmost segment of the Cascade Arc, a chain of volcanoes that extends from northern California to British Columbia. The Cascade Arc has developed in response to subduction of the Juan de Fuca oceanic crust beneath the west coast of North America, forming what is known as the Cascadia subduction zone.

So, why do the volcanoes of the Garibaldi Belt exist in the first place?  New insights are being provided by high precision Sr, Nd, Hf and Pb isotope ratios (Triton TIMS; Nu Plasma MC-ICP-MS) and trace element abundances (Element 2 HR-ICP-MS) measured at the PCIGR in basaltic lavas collected from the Garibaldi Belt volcanoes. We are also geochemically characterizing the sediment accumulated atop the Juan de Fuca oceanic plate because hydrous fluid or melt derived from subducted sediment is thought to play a role in magma generation in many arcs, including the Cascades.

Our new data have revealed that basalts erupted at Mt. Meager, Salal Glacier and Bridge River Cones show no influence from subducted water or sediment, consistent with the “hot” conditions in the Garibaldi Belt. We have also found that the mantle tapped by the northern Garibaldi Belt volcanoes is distinct from the mantle beneath the rest of the Cascade Arc, and that mantle melting takes place at much higher pressures and temperatures.

This evidence indicates that the northern Garibaldi Belt basalts may be related to a “tear” in the subducting plate that provides a pathway for upwelling deep, hot mantle that undergoes decompression melting.

PCIGR to collaborate with MDRU on $2.7M NSERC Alliance funding for mineral exploration research in B.C.