In 2013, PCIGR had the first Nu Plasma 1700, an extended geometry high-resolution multi-collector ICP-MS, installed in Canada. At that time, our Nu Plasma 1700 was just the fifth of its kind in the world. The latest TIMS instrument was designed as part of a collaborative development project with Nu Instruments Ltd. (UK) and in 2014 was the first TIMS commercially produced by Nu. 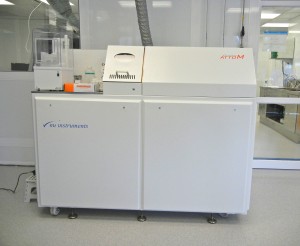