Initially, she worked on the Hawaiian Scientific Drilling Project (HSDP, Blichert-Toft et al., 2003; Nobre Silva et al., 2013) and then focused on Mauna Loa (the largest volcano on Earth), among other key volcanoes.

Approximately 120 shield lavas of Mauna Loa were analyzed, corresponding to over 500,000 years of volcanic activity. The high-precision data that was generated confirm the clear geochemical difference between the Loa and Kea volcano geographical trends, and clearly document the Loa source to be both more enriched and more heterogeneous than the Kea source. The EM-I component in the Loa source has been connected to the presence of the Pacific LLSVP (large low shear velocity province) at the core-mantle boundary on the Loa side of the volcano trends (Weis et al., 2011). Conversely, the Kea component is compositionally similar to “C” and is interpreted as being a common, widespread composition within the Pacific deep mantle (Nobre Silva et al., 2013). 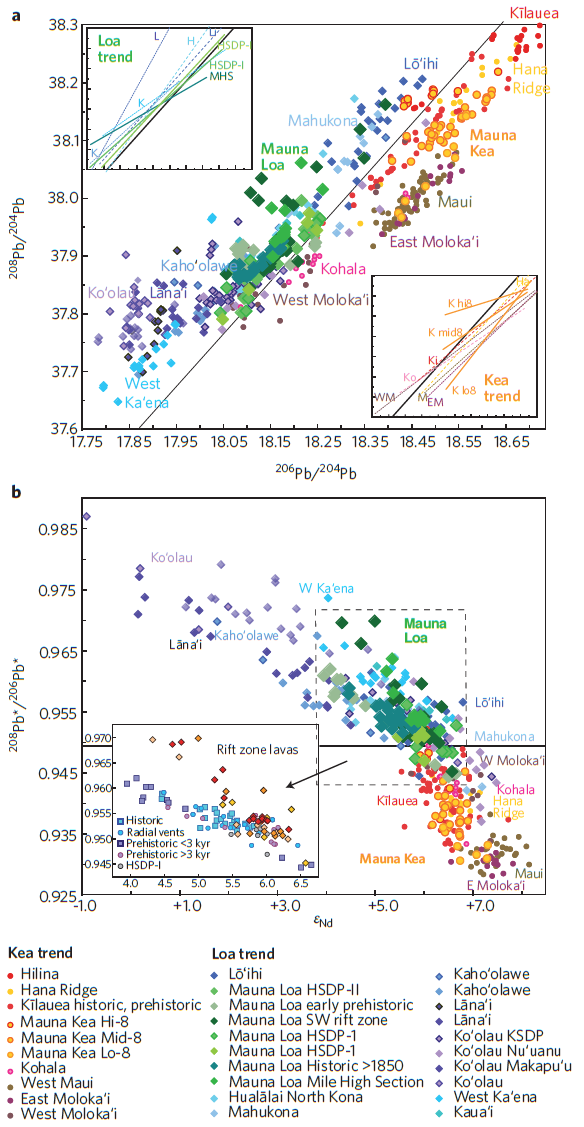 Temporal evolution of isotopic compositions from Hawaiian volcanoes. a, Plot of εNd against distance from Kīlauea in kilometres along the Hawaiian chain. b, Plot of 208Pb*/206Pb* against distance from Kīlauea. Symbols, colour coding and data source (plus Wai‘anae) as in the figure above. See Supplementary Information for data sources in Weis et al. (2011). Individual volcanoes are represented by the average of the analyses of shield lavas (thermal ionization triple- spike or multicollector inductively coupled plasma mass spectrometry data), with the two standard deviation on the mean used to indicate the variation around the average. Shaded fields indicate the total range of variation covered for each volcano. 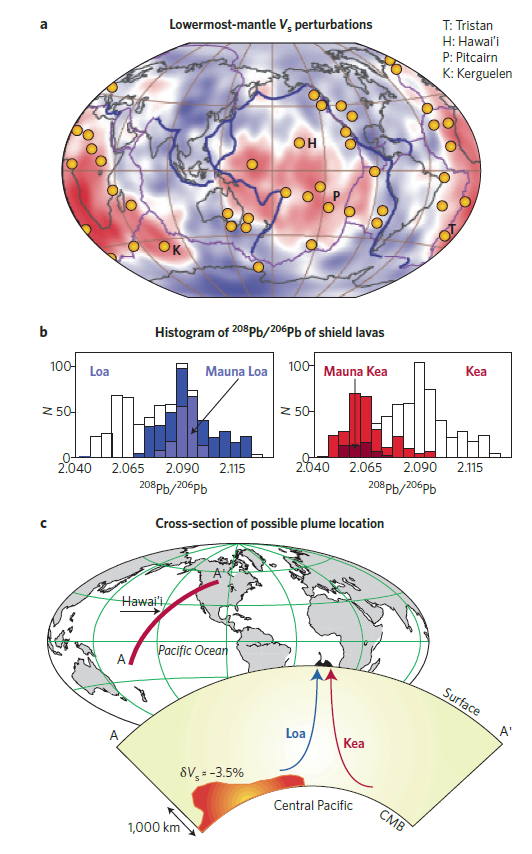 This study is being extended back in time, along the Northwestern Hawaiian Ridge, up to the bend at ~41 Ma, spanning 3,400 km of the Hawaiian Chain, to establish the source characteristics (components involved and depth) of the Hawaiian plume (see Garcia et al., 2015 for a review of the sample settings). 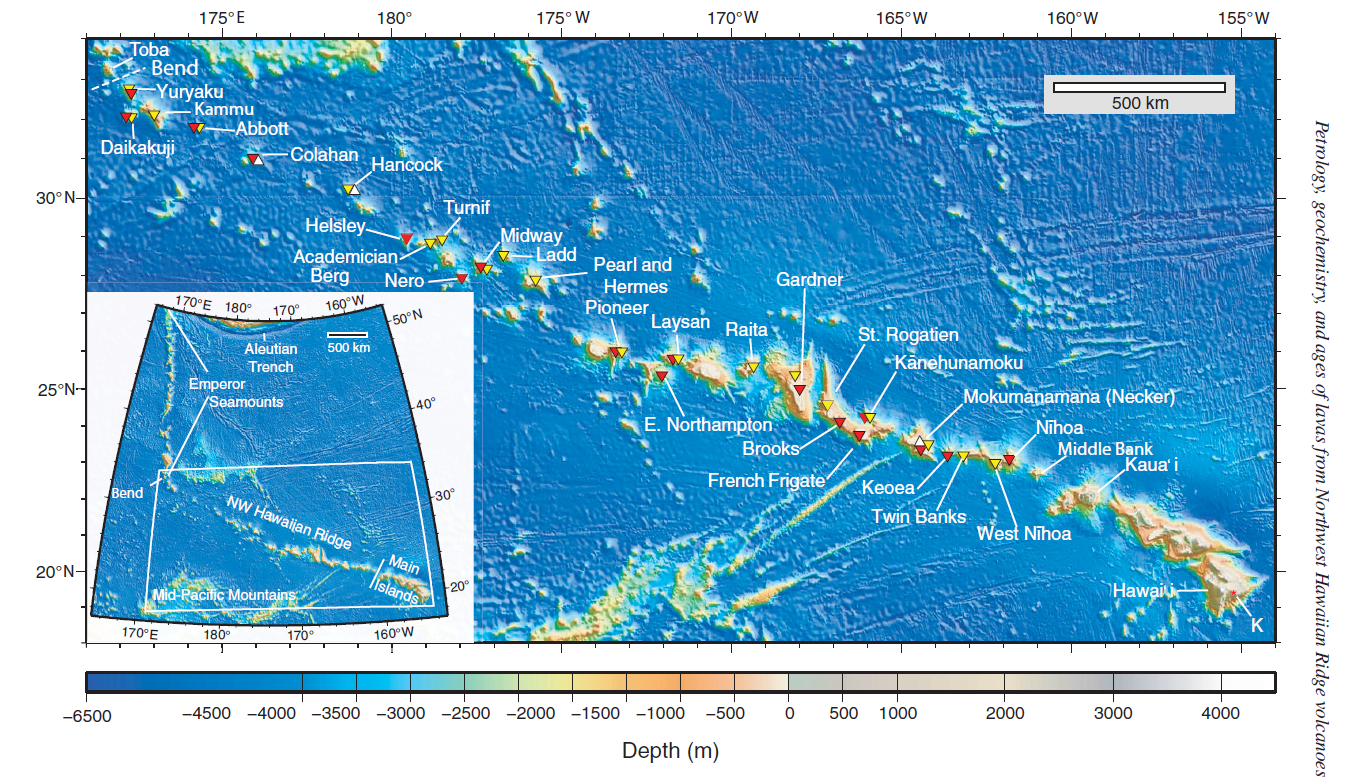 Map of the Northwest Hawaiian Ridge based on the SRTM30_PLUS (Shuttle Radar Topography Mission) bathymetry data set (Becker et al., 2009). Red triangles show locations where shield stage lavas (tholeiites) have been recovered; yellow triangles show where post-shield stage transitional and alkalic lavas have sampled; white triangles show where rejuvenation-stage rocks were obtained. Note that many Northwest Hawaiian Ridge volcanoes have no geochemical data. The location of the Kīlauea reference point at the center of its summit caldera is shown by the K at 155.273840°W, 19.413017°N. The data were gridded at 1 km spacing (~30 arc s). A Mercator projection was used for map. Inset: Map of the north-central Pacific Basin showing the Hawaiian-Emperor Chain, Mid- Pacific Mountains and Aleutian Trench. A transverse Mercator projection was used (white box shows location of main map). From Garcia et al., 2015.

This information is also used to model the variations in space and time (create a geochemical-isotopic map), and to determine when the Loa component appeared and when the Loa and Kea plume trends became independent.

Dominique has also been working on the “What, When, Where and Why of Secondary Volcanism?” She has participated in a series of JASON2 ROV dives on the Northern Hawaiian Islands (lead by M.O. Garcia and G. Ito, University of Hawai’i at Manoa), sampling the various phases (pre-shield, shield, post-shield and secondary, i.e. a record of over 5 myr) of volcanic activity of a Hawaiian island (Garcia et al., 2008). 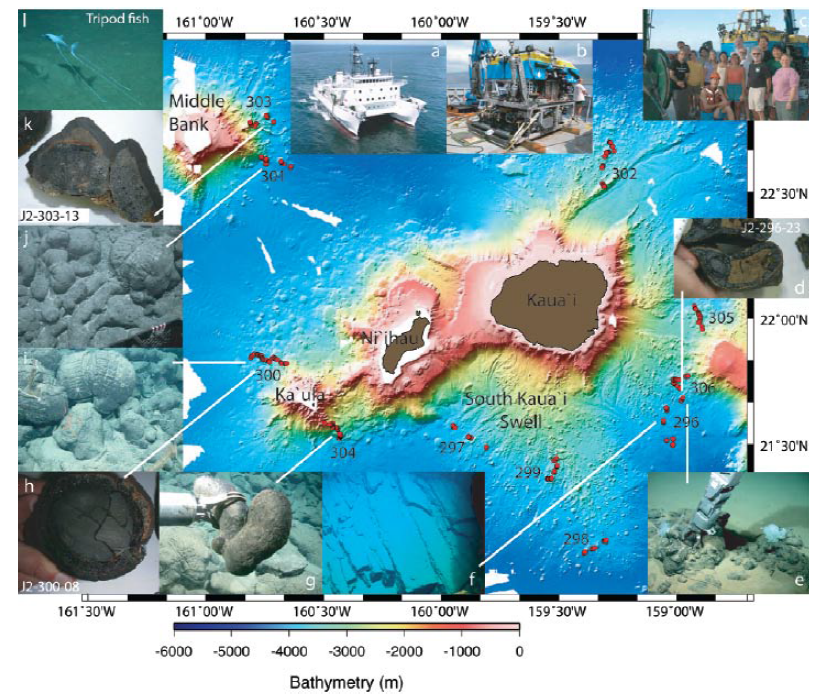 Specifically, the studies involving these samples investigate (i) the relationship between small-scale heterogeneity at the volcano scale and large-scale zoning in the plume source, and (ii) the origin of the post-shield and then secondary volcanism and the reasons why they carry more geochemical anomalies than shield-stage lavas.

Over the last year, two new projects have started: the sampling and thorough geochemical characterization of 1) the Makapu’u enriched end-member (Ko’olau) on O’ahu and 2) the shield-stage lavas on Kaua’i.

Garcia, M.O. et al. (2015) Petrology and geochemistry of volcanic rocks from the south Kaua‘i swell volcano, Hawai‘i: implications for the lithology and composition of the Hawaiian mantle plume. Journal of Petrology, 56: 1173–1197.

Garcia, M.O. et al. (2010) Petrology, geochemistry and geochronology of Kaua`i lavas over 4.5 Ma: Implications for the origin of rejuvenated volcanism and the evolution of the Hawaiian plume. Journal of Petrology, 51: 1507–1540.